The world is becoming an increasingly unstable and dangerous place. More than ever before, anyone trying to tackle society's problems or help the refugees and traumatised victims of corruption and war, needs a greater understanding of the fundamental unit of society – the human being.

This unique online course, run in association with The Conciliators Guild, focuses on how to improve politics by involving a greater understanding of psychology in domestic and international relations.

You will gain an increased awareness of what war, terrorism and bullying reveal about the human psyche and an improved ability to see through political and cultural assumptions, by recognising the underlying emotional dynamics driving behaviour.

You will also discover the most accurate explanations available about the root causes of extremism in politics, radicalization, the refugee crisis and the growth of authoritarianism, due to the ease with which mass hypnosis is used throughout the world today.

The Middle East serves as the primary case study – but the implications of the material covered are universal and provide powerful new directions for a way out of the chaos we currently find ourselves in.

The course facilitators are  John Bell and Ivan Tyrrell.

What you will gain:

Why we need a new direction…

Waves of unease are sweeping the world. Our political life is reeling. The rise of ISIS, intractable disputes like the civil war in Syria, the Israel-Palestine conflict, the Turkish Kurd war and the looming dangers from Africa, America, Asia and the Far East are volcanic and affecting us all.

But we are so conditioned that we resort to the same old habits to address these matters: exerting financial or military power; exhibiting paranoia towards outsiders or adopting technological solutions as if they were panaceas. However, experience tells us, with our track record of political failure in peace making and fighting corruption, that we are most likely looking in the wrong direction...

The reason dire problems remain unresolved and continue to grow more complex is because we are not directing our attention to the main cause they arise from: the ignorance and mismanagement of basic human needs in society – especially those related to our natural emotional states.

Changing economics, political structures or power balances will not curb the cruel violence or spread of terrorist actions whilst the people operating in those systems remain greedy, needy, and opportunistic.

To find workable solutions we urgently need to take into account what lies behind our political and social problems – our innate human motivations and needs. To think otherwise is a tragic misdiagnosis.

This course is dedicated to developing a process of long-term education about how to improve politics by involving greater psychological understanding in domestic and international relations – the only source of hope for the future.

We invite you to participate in this endeavour.

Who would benefit from this course?

This course derives from a workshop held in London on 10th June 2017 by The Conciliators Guild and Human Givens College.

The attendees came from 13 countries and included diplomats, civil servants and conflict negotiators, plus practitioners of the HG approach working in education and psychotherapy.

This online version is split into four modules which are broken down further into different sections containing films of the lectures given in English by the facilitators, John Bell and Ivan Tyrrell along with questions from the audience and contributions from attendees.

Each film is followed by a short series of multiple choice questions which are designed to help you absorb and think about the material and ideas covered.

Once you've finished the whole course, you will be awarded a CPD Certificate of Completion (equivalent to 6 hours of continuing professional development) by Human Givens College and The Human Givens Institute.

“This course was steeped in psychological insights that could profoundly benefit humankind – if only they were more widely understood and acted upon. A brilliant course. ”

“I can attest to the ‘Human Givens’ approach. Unless the ‘givens’ are listened to and respected, you cannot truly help others… this approach is universally applicable.”

“I do conflict resolution work mainly in the Middle East and Asia. This [course] has given me an additional dimension that I didn’t previously have. I've certainly found it useful – it's given me insights and obliged me to open up my mind to things I hadn't previously anticipated. It’s given me a new framework to think through complex problems.”

Andrew Whitley, The Elders' Policy and Advocacy Director, formally of the UN

“This is an important understanding of how ISIS meets the needs of young people – my general awareness of the whole ‘topic’ was raised, I feel more educated and this will impact on the many discussions I have with people”

“This new paradigm [human givens] is the perfect antidote to many dilemmas facing diplomats today. Much else has been tried and failed. It's time to meet people's needs before they fall into the hands of extremists.”

"Essential information for anyone wanting to understand the current global situation and what might be done to address it."

“Great to explore the link between the human givens organising idea and politics – John's piece on ISIS recruitment and how meeting people’s needs are front and centre of their recruitment strategy was particularly poignant. Well done Ivan and John – it is a big subject and you packed a huge amount in to one day.”

"It was very informative to learn more about how hypnosis is used to brain wash and manipulate people at society level. I was particularly struck by the comments around Trump's use of shock to disorient people. This makes complete sense. Humanity needs to wise up about how easy it is to be manipulated. I have felt this for a while but this course gave me some concrete information about how the manipulation takes place. It seems to me the more we understand it the less likely we are to fall victim of it."

“A very interesting way to look at human needs. Of course we always think of Maslow’s pyramid of needs but this is kind of Maslow on steroids! It’s much more elaborate and yet simple to comprehend. I’m thinking about it as almost a design philosophy for designing political systems that Ivan and John have laid out.” 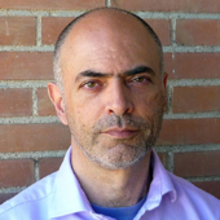 John Bell is the Director of the Middle East & Mediterranean Programme at the Toledo International Centre for Peace. He is also a former Canadian and United Nations diplomat who has worked extensively in the Middle East in Cairo, Gaza, Beirut and Jerusalem on issues ranging from Islamic fundamentalism to the peace process.He has been a member of Canada's delegation to the Refugee Working Group in the peace process, political adviser to the personal representative of the Secretary-General of the United Nations for southern Lebanon, adviser to the Canadian Government during the Iraq crisis in 2002/3 and consultant to the International Crisis Group on recent developments in Jerusalem.He is a founding member of the Jerusalem Old City Initiative (Universities of Toronto and Windsor), an effort to find creative options for this contentious issue. John Bell has written extensively on Middle East issues in magazines and newspapers across the globe. He is originally from the region and a living example of its shared and mixed heritage.He views the human givens framework as a missing piece in the equation when attempting to manage international relations. The innate emotional needs of everyone involved have to be taken into accound – needs that motivate our behaviour.He is a founder member of The Conciliators Guild.
Buy £129.00